At 4200 meters, Volcan Tajumulco is the highest point in central America, and the 69th (hehe) hightest point in North America. It can be completed in a single day, but it's well worth camping overnight to catch the sun rise over the mountains.

We booked our hike through , an organization that gives tours to travelers of various Mountains around and uses the money raised to fund a couple of local schools. It took us a while to find the place (it’s down some slightly dodgy looking side streets), once there we were introduced to the rest of our group (we had to do the go around the circle and introduce yourself thing, I hate this because I spend my time trying to think of what I’m going to say, and then miss everyone else's names who go before me). All of our guides were Dutch apart from one, they gave us an outline of what we’d bring, and a backcountry camping 101. You could have borrowed almost all of the equipment you’d need for the hike, including water bottles, but we only needed to borrow some gloves and water bottles. As we left the meeting there was a strong smell of weed coming from a side room where a jam session was clearly happening. Perhaps a celebration of Western traveler stereotypes in Southern America?

The following morning we got up at 4:30 AM to be at Quetzal Trekkers for 5:00, our guides turned up with our transit to the bus station; a beat up panel van which we traveled in the . Once we reached the bus station, it became clear that I would get to fulfill a 3-day old dream of mine - to ride a chicken bus.

Chicken buses are Guatemala's version of Greyhound or National Express, a government-subsidized bus service that runs to major cities and everywhere in between, but that’s about where the comparison ends. A chicken bus is a decommissioned American school bus that’s imported into Guatemala, had the middle chopped out, then is welded back together. Doing this allows the bus to go around hairpin bends at insane speeds. The buses are owned by the drivers themselves and they customize them to their own tastes; sound systems, video systems, engine modifications and paint scheme.

To say the seating in a chicken bus is cramped is an understatement, the chicken bus has taught me that a bus being full is more of a state of mind, that a hard concept. Although the bus has been shortened, it still has the same number of seats as before. My legs to long to fit in a seat, and I’m the kind of person that doesn’t feel cramped in an Economy class airline seat. You’ve not only got less room in front of you than a normal bus, you’ve also got less room to the side as well, as they’ll sit 6 people to a row. It’s very cozy. When you get on the bus and sit next to someone it’s tradition to at least hello to them, a small conversation is not out of the ordinary. This makes total sense because you’re both going to get fairly intimate whether you like it or not.

After our first chicken bus ride, we stopped for breakfast before boarding a second chicken bus and arriving at the start of the hike. Everyone checked they still had all their gear, then we began the gentle climb. If this hike had been in Canada and started around sea level it would have been difficult, but completely manageable. The elevation gain was around 1000 meters to the campsite, which is slightly less than Garibaldi, or 1.2 Grouse Grinds. But we live at sea level, and it takes 14 weeks to to an altitude of 2000 meters, our hike started at 3000 meters, and 'd been in Guatemala for 5 days. At the hike really wasn't so bad, it was slow going, but I felt fine. But as we started to climb the trees things changed. 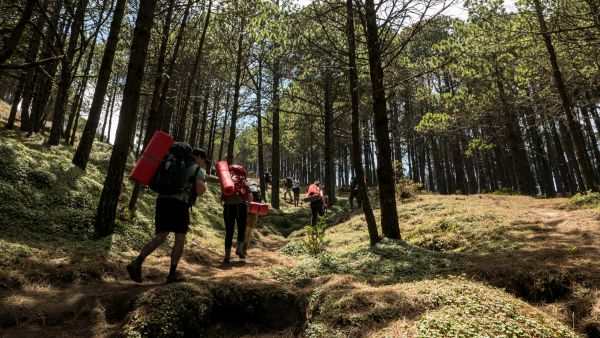 I suddenly felt quite faint and my vision started to blur. I had to sit down for a few minutes and devour a few and some water before I started to feel better again. I think this was partly the , but doing Volcan Santa Maria the day before might not have been the best idea. I was also carrying a heavier pack than normal as I had 2 of water. Chloe was also feeling bad, she'd had a cold for the last few days, and hadn't slept well. So in a  show of friendship, our group decided to split up some of the heavier items in her pack between us. We continued our climb and the views got better and better, and we reached the campsite around lunch time. Everyone was a little bit tired. 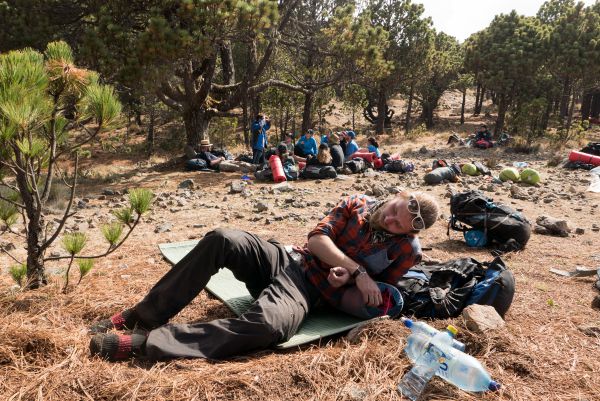 The Americans were playing 'Heads up' and having lots of acclimatized banter (they had been living in Xela for 2 weeks already), but our sea level dwelling group couldn't do much apart from lying around and occasionally babbling some half-formed sentences. We ate lots and lots, the guides put up our tents for us (a real novelty for us). It got colder and darker, we ate some more. Then it was time for a trek to a low peak to watch the sunset....

The only problem was that by the afternoon we were completely fogged in, and you couldn't see anything, going up there was completely pointless. But for some reason everyone was agreeing to go, we agreed to go, only because everyone else was going, but with the altitude sickness and no view I really didn't see the point. At the last minute and Chloe changed our minds, two of the doctors changed their mind 50 meters from base camp and decided to stay with us. As we sat in basecamp eating chips and watched the others wobbling sleep deprived bodies disappear into the fog one of the doctors "I'm so glad I'm not up there". how we laughed.

After a hearty dinner of pasta with more pasta, it was time for bed. We were sharing a tent with 7 people, it was a bit cozy. I didn't really sleep that well, and the start didn't really help. Everyone got out of bed, then we set off into the darkness. As we made our way up the final 200 meters to the summit the sun started to rise. 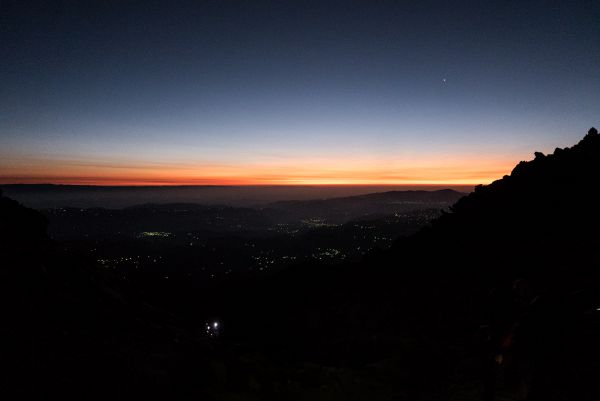 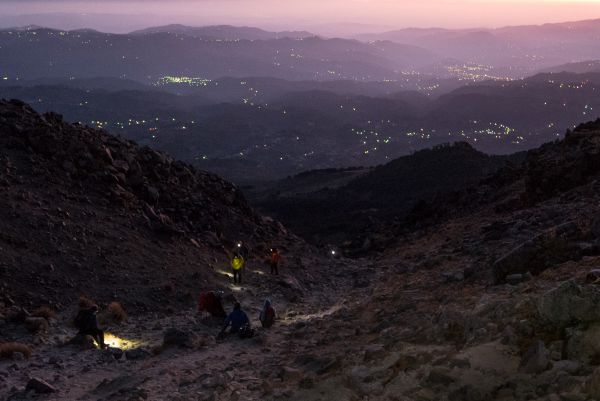 I've never really understood why people go on alpine starts unless completely necessary. Just get an extra 3 hours sleep, you weirdos. But I get it now. Seeing the night turn to day and reveal the landscape is really amazing. Once we reached the summit, I shed a few tears. The climb had been really tough, I'd had 13 hours sleep in the last few days, and I'd just reached the altitude I'd ever . I was pretty proud. The view was incredible 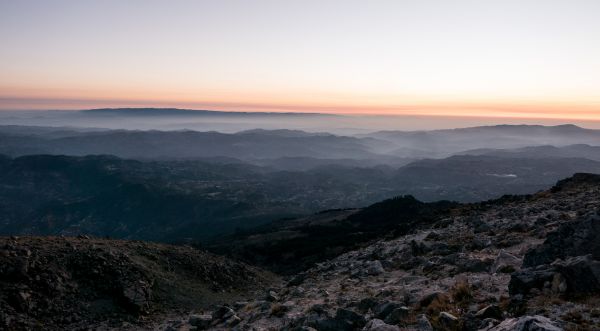 and Vrata had made the final climb together, we went and found Veronika and Martin who were already at the summit (naturally), s while later Chloe joined us as well. We got some group photos. 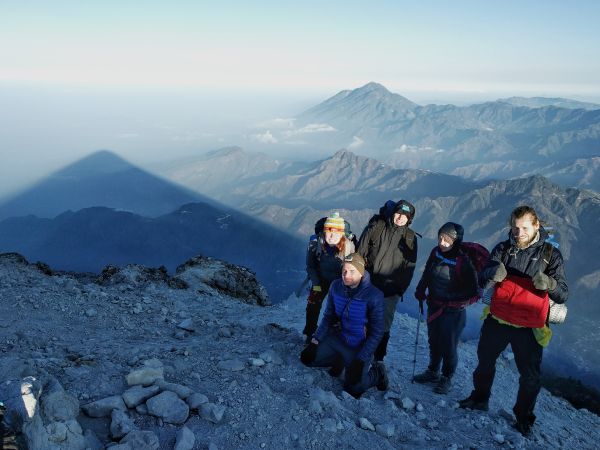 Greg is a from the UK and currently lives in Canada. His favourite things are hiking, snowboarding, photography and Computer stuff (programming and gaming) in that order. When he grows up he wants to be a chicken bus driver. He also hates writing about himself in third person and general self promotion.